I used to love moussaka as a child, but for some reason I had totally forgotten about this yummy, Greek dish. But last week I came across a recipe for low carb moussaka on a Norwegian blog that I follow. I was tempted, and of course I had to try it. I can highly recommend trying this recipe, but be aware that it's not exactly fast food! So make sure you save it for a day you're not in a rush. I think I spent 3.5 hours in the kitchen - partly because the sauce went a bit pear shaped, and I had to do it  over again (only the sauce-part of it, luckily...). Traditional moussaka calls for potatoes in addition to eggplant. But this recipe here contains only eggplant, so it should be a perfect LCHF meal.

For the eggplant base you need:
2 eggplants
Salt
Pepper
Butter for frying

Slice the eggplants as thinly as possibly, and place them on paper towels on the kitchen bench top. Cover the slices generously with salt. (The salt draws out a lot of water from the eggplants, and prepares them for frying). Let sit out for half an hour, and then wipe off the water that has gathered on top of the eggplant slices. Sprinkle the eggplant slices  with salt and pepper after taste, then fry in generous amounts of butter. When the slices are nice and brown, spread them out in a medium sized baking tray. This now forms the bottom of the moussaka.

Next, make the minced meat filling, which will go on top of the eggplant.

Chop the red onions and the garlic finely.Fry this in some butter in a frying pan. Then, remove from frying pan and place in a saucepan. Brown the minced meat, then add this to the onion mix in the saucepan. Now add the rest of the ingredients in the list above. Reduce on low heat. Then, remove the bay leaves, and pour the minced meat mixture on top of the eggplants in the baking dish.

Next step is to make a cheese-sauce which will go on top of the minced meat. (Beware! This is the step where I messed up...)

Beat eggs until fluffy.
Boil the milk together with cream and butter until it has thickened a bit. Then add the beaten eggs to the mixture while constantly stirring. Add the spices to taste. Finally, add the grated cheese, and stir, briefly, until even. Then add this cheese sauce on top of the meat-sauce.

Note: The first time I think I stirred to much, and it all separated into one yukky fatty phase and one aqueous phase... But the second time I was quicker, and it went ok.

Bake on 190 degrees C in the middle of the oven for about 45 minutes.

Serve with a Greek salad, and enjoy! I made the salad with cherry tomatoes, red onion, olives, feta cheese and some store-bought tzatziki.

The two of us got at least three meals out of this generous recipe. 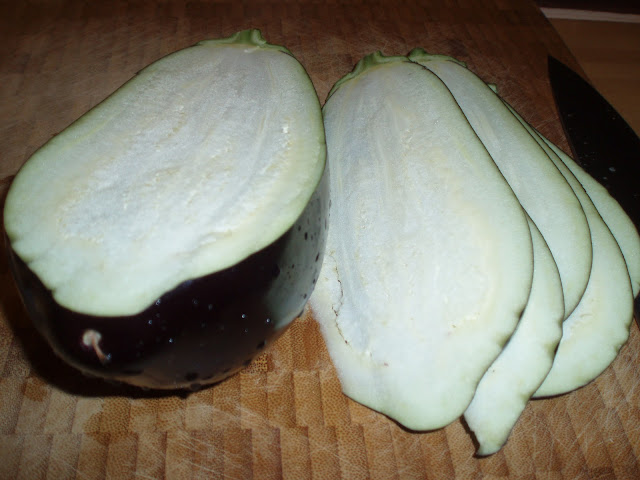 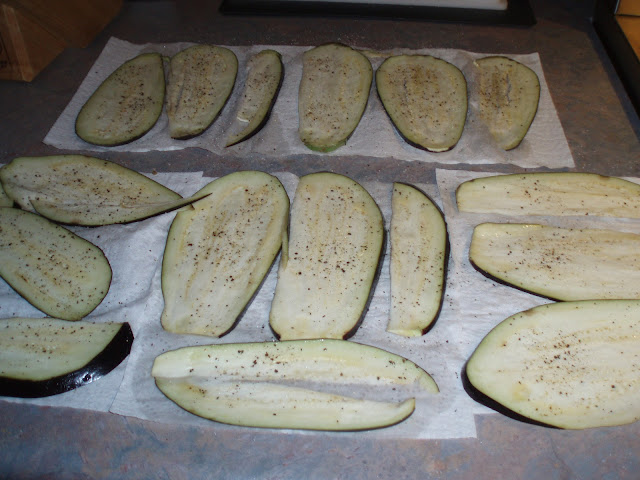 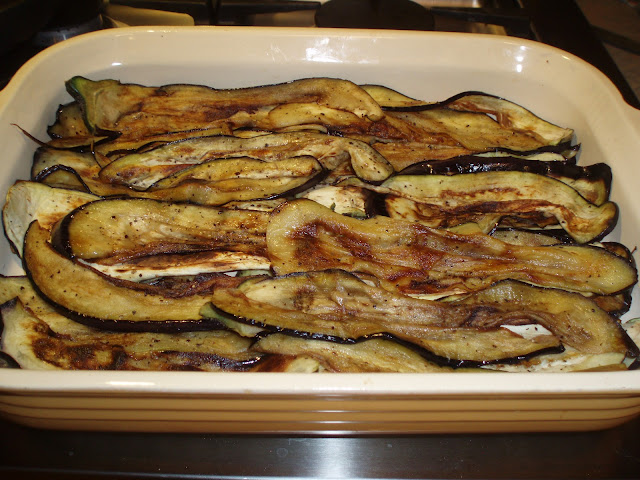 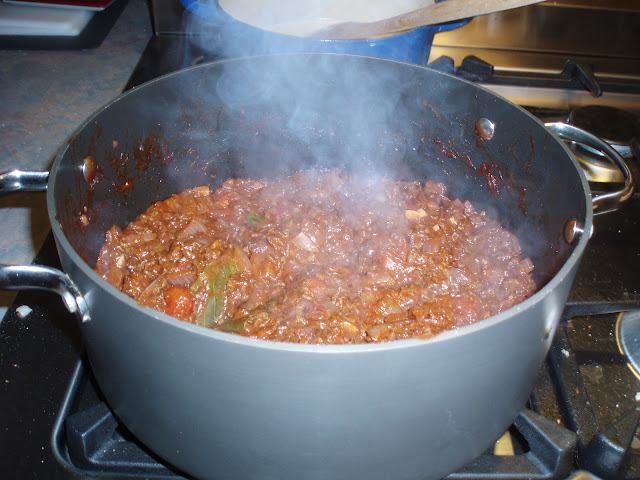 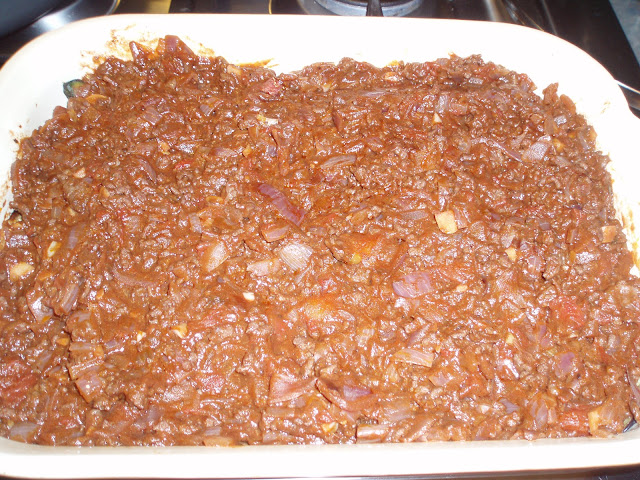 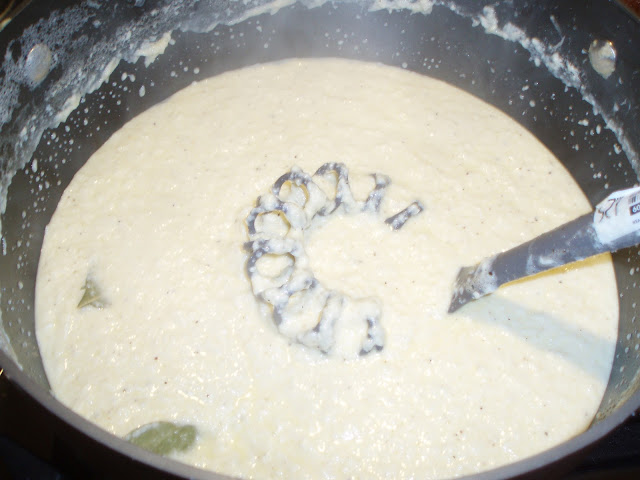 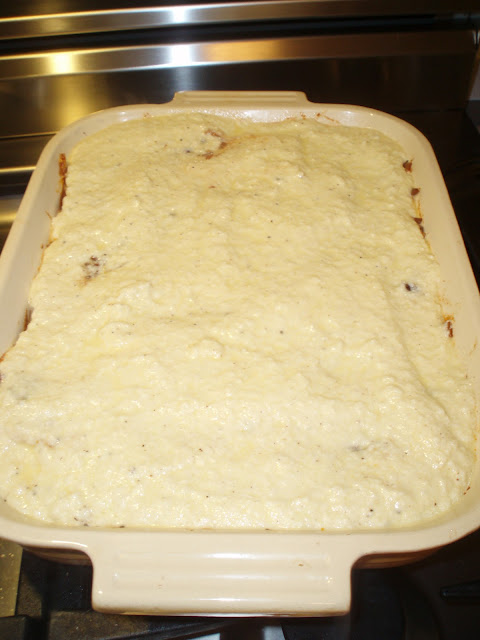 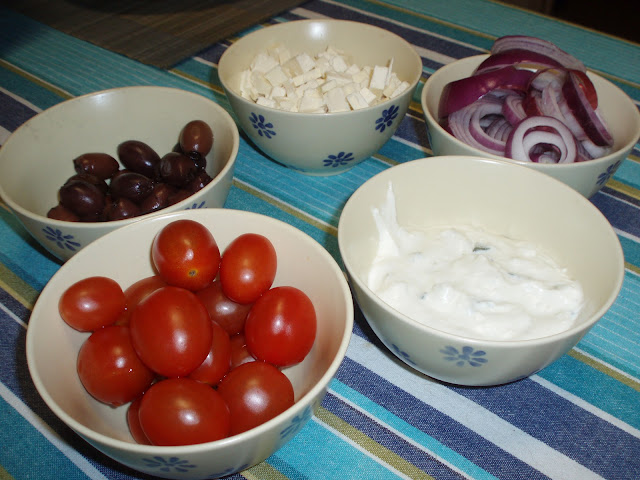 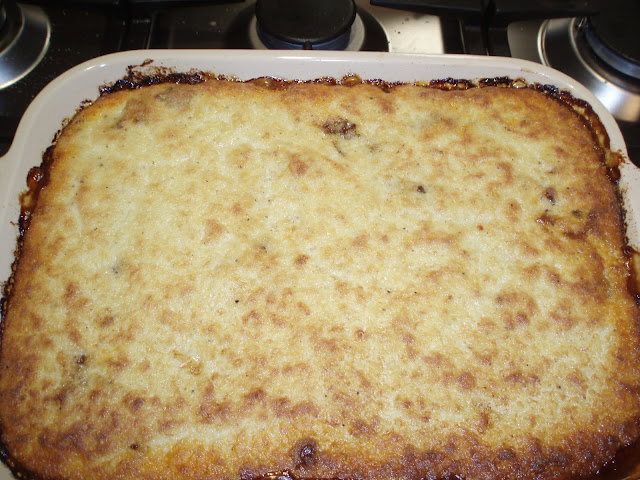 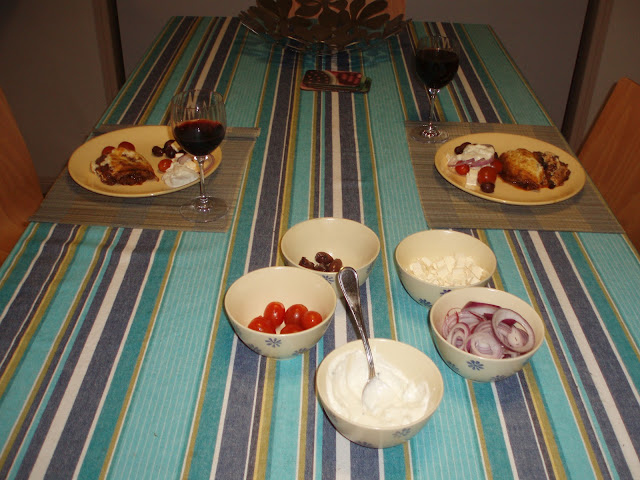 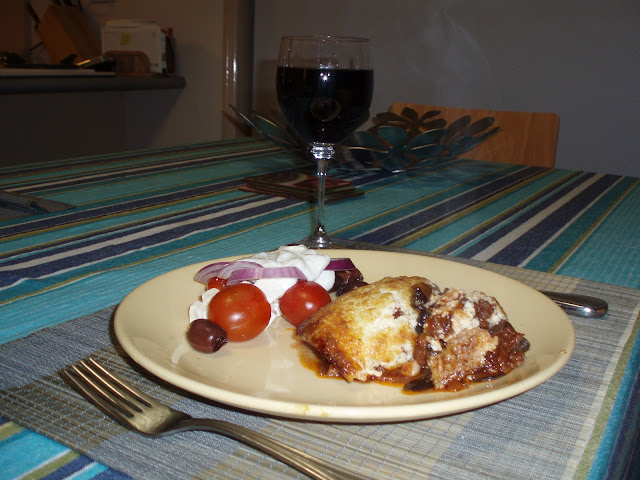 I found this recipe on the very inspirational blog fotballfrue.no
Posted by BK at 8:34 PM